Tips, Tricks, Q and A for Cooking Techniques
Post Reply
12 posts • Page 1 of 1

I just discovered a local source for beef ribs and willneed to throw a few racks on the smoker next time I fire it up. Sad truth is, I’ve never cook beef ribs before. I’ve done pork ribs by the case but have had trouble finding the beef variety....till now.

So, wondering if anyone out there might be willing to pass along a few tips, temps or cook times to get me started on the right track.

They are a completely different animal and I can never get them the way I like. Very fatty and will shrink up a lot more. They are easy to overcook in my experience as I want to render more fat out and then I dry the meat out too much. I avoid them but know they can be done right ....just not by me

Thanks towtruck....Sorry they have eluded you. I’m hoping to give it shot, tho. My understanding is you cook them to temp and double check by tenderness as opposed to pork ribs that scream finished with a “bend” test. My thought is to treat them much like a brisket and wrap them after 4-5 hours. Also going to use my standard beef rub.

I've never had any luck with them either but I think it's because I can't seem to find the really thick, meaty ribs around here. Most of the ones that are available are pretty thin and they have a weird texture when they're finished. Everything I've read says to treat them like a brisket so I believe that you're on the right track.

Used to be a guy on here named Nick, he was the king of beef ribs. OMG could he cook a mean beef rib.

I want to find them for a good price and experiment with them cause DANG they were good.

This is not the guy I was talking about but these look pretty good. The ones nick did were a much longer bone. More like they came from a triceratops then from a cow.

Thanks guys....good confirmation I’m in the right track.

Can’t say for sure what these look like (as I’ve not been to the store yet) but description indicates a 4 bone plate of spare ribs weighs about 16 pounds. I’m guessing these are the big ones that everyone wants.

My mouth is watering already......I’d get them tomorrow but I’ve got family in town and I never experiment for company. Afraid of putting out a sub-par meal and ruin my reputation....lol.

Those should do well. All the one's I have done have been single ribs....probably why they dry out.

bvbull200
Just Got in trouble for buying tools

I LOVE me some beef ribs. Definitely one of my favorite things to cook. 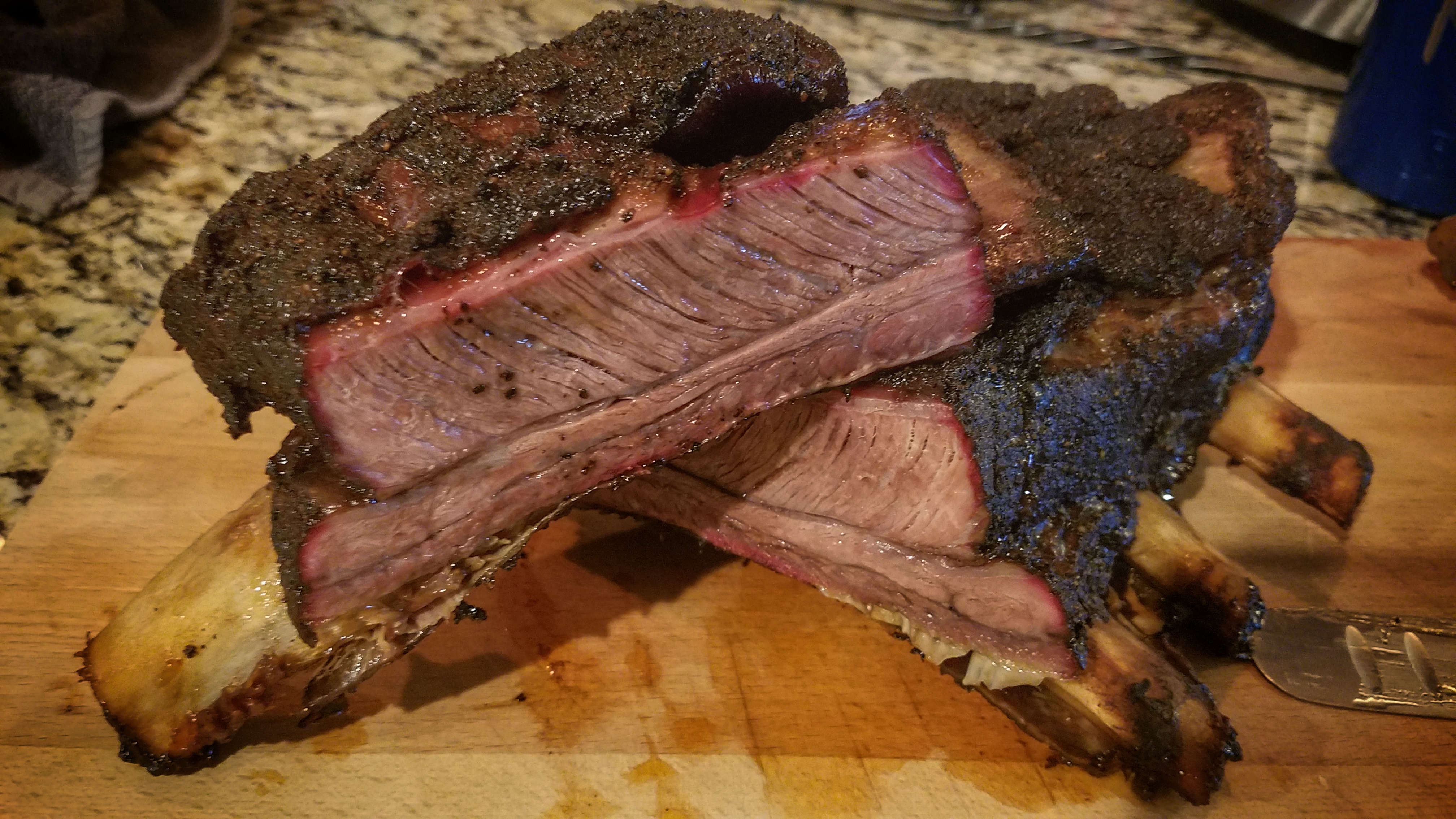 Treat them a bit like brisket and plan on wrapping. I do a nice pepper/salt based rub on them. My go to now is the rub my company makes - On Point. I hope that doesn't sound like a shameless plug - I don't intend it to be. I don't use the rub just because we make it, we now make it because it is what I use.

Anyways, I think you can get away with removing the membrane on the back like you would pork ribs. Some folks leave it on because these bones will separate from the meat much easier than regular pork spares, but it's up to you. A good application of rub, then in to the smoker at about 250-275*. If your rack is 2 or more bones, then it'll all take about the same amount of time. Only if you do 1 bone sections will the cook time be notably shorter.

It usually takes about 3-4 hours to get a nice bark at those temps. Once the color start coming around, I'll set them in a foil pan and place a piece of foil over it, tightly sealing it up, and put it back in the smoker. The braising of the meat does wonders for tenderness and using the foil pan captures a lot of juices for basting at the end, adding to beans, or any other number of uses. It's usually not more than an hour or so in the foil before they start to be ready.

You're kind of splitting the difference between pulling by temp and pulling by feel. There are parts of the meat that will render real nice and feel very soft, very early. You'll usually want it to probe at about 200* in all of the thicker parts of the meat. If parts feel really tender, but some areas not as much and probe at 180*, you need to keep letting them ride.

If you feel you lost too much bark, you can always pull them out of the pan and let sit in the smoke for 30 minutes or so to finish, but I don't think I've ever deemed that necessary.

They should get a short rest, so pull when they are done, vent a little heat from the foil pan, wrap up again and set under a towel in a cooler for 30-60 minutes.

All in all, you can usually be ready to eat them in 5-6 hours from the time they hit the pit, provided you're running 250-275*. As with all BBQ, though, it's an estimate and your experiences may vary. You're better off giving yourself a little extra time and just resting them longer if need be.

I hope that helps!

If it's tourist season, how come I can't shoot 'em?

Super awesome info.....exactly what I needed and really confirmed that I was so the right track.

This is DEFINITELY on my 'gotta try this' list!