After cooking with it today I found out I need to make a different pair of hooks to handle the hot charcoal baskets. I was using a pair of hay hooks to pull them out and that worked well until this cook when I recharged the basket with another lit chimney.....while the hay hooks pull well they don't push real well and the hook slips into the basket. It's too hot to handle with welding gloves on so I will make a set of basket pullers that will let me push them back in as well as pull them out. I was grabbing onto the cross bar and the end....I think I will keep doing that but with a better designed hook. 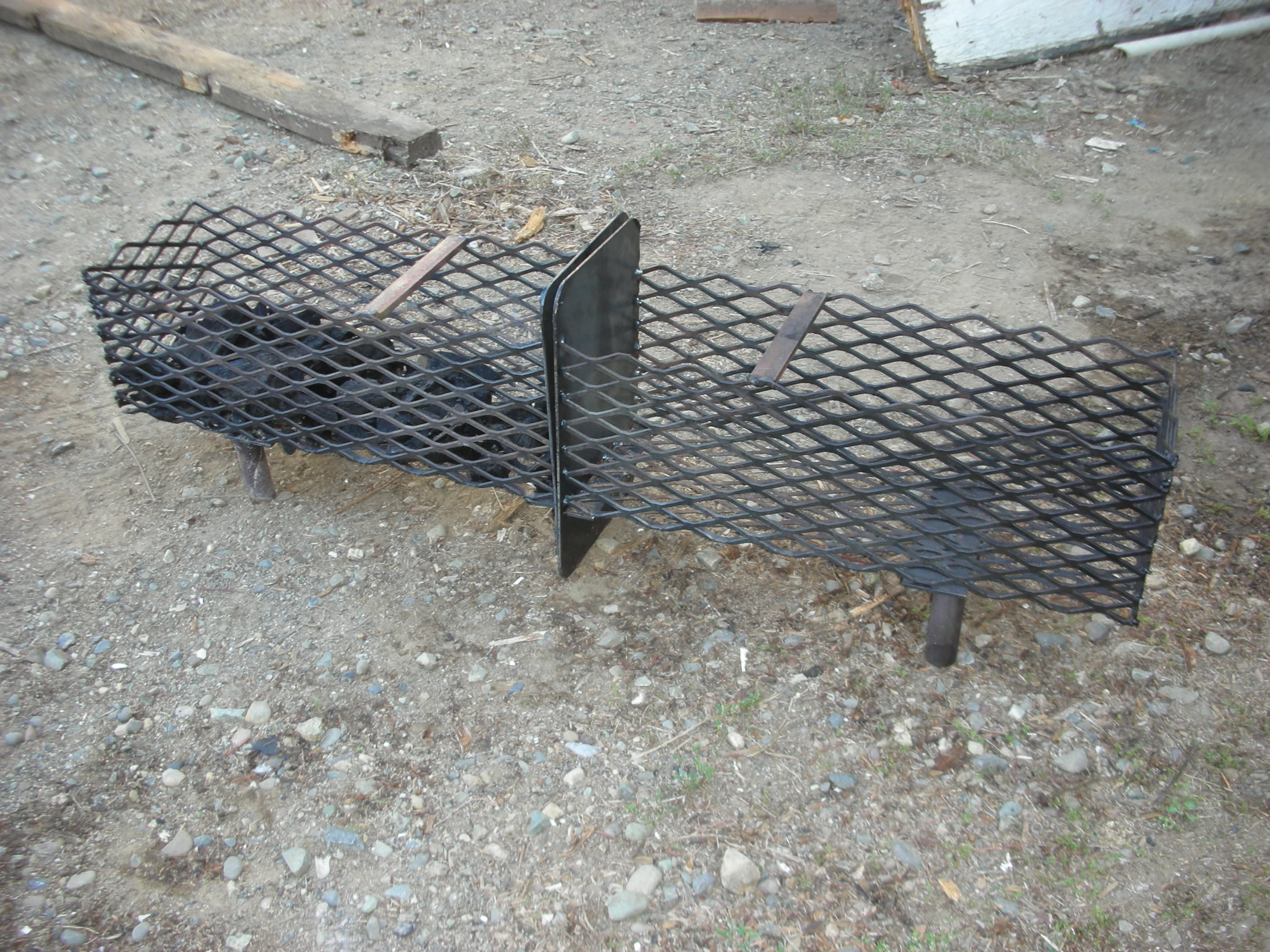 After sleeping on it my brain finally kicked in.....I just used some 1" tube and welded on handles to the ends of the baskets that are 13" long. I can now reach in and grab them with gloves and pull out the baskets. Putting them back in is a breeze and both hands are behind the fire not over it. No silly hooks to mess with!

I had a chance to weigh my trailer yesterday on our scale at work......1400 lbs. Sure does not look like it weighs that much but it towed like it.

I am going to add an intake damper to the bbq, beef up the handles I made on the smoker fire baskets, and add another small flat shelf over the right fender, and that should do it. Last nights cooking at work was a good test run on how it operates.

Good to hear that your cook went well. It's crazy how fast the weight adds up when you're building a cooker.

I cooked another batch of chicken on the bbq this weekend and decided the bypass plate needed to go. The coals sit too high when on top of it. I cut it out and dropped a narrow grate in the bottom. I still have to make an air intake control but the extra 3" of height over the coals should do the trick. 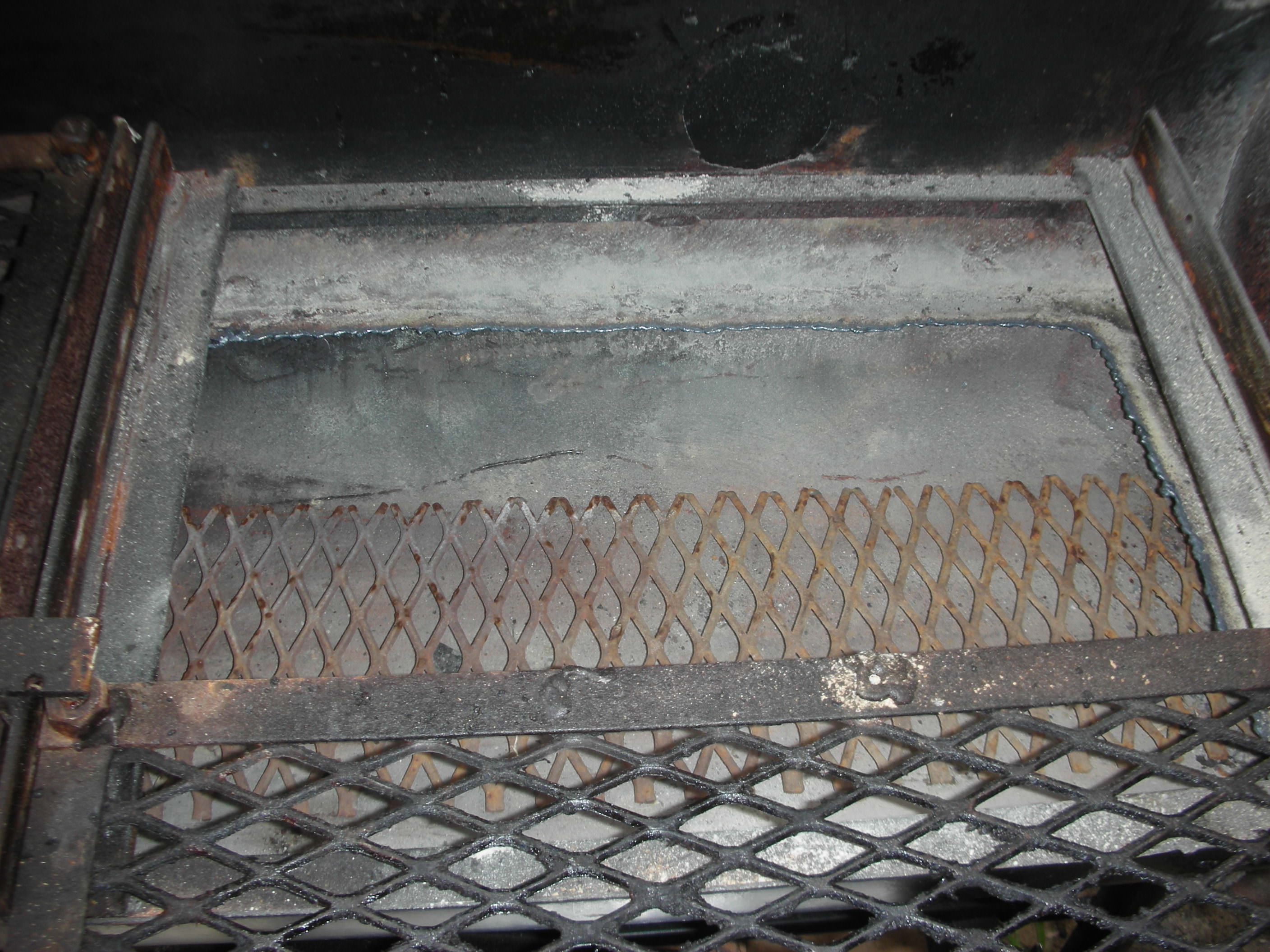 Here is the handle I put on the fire baskets for the smoker to help get them in and out easier.. 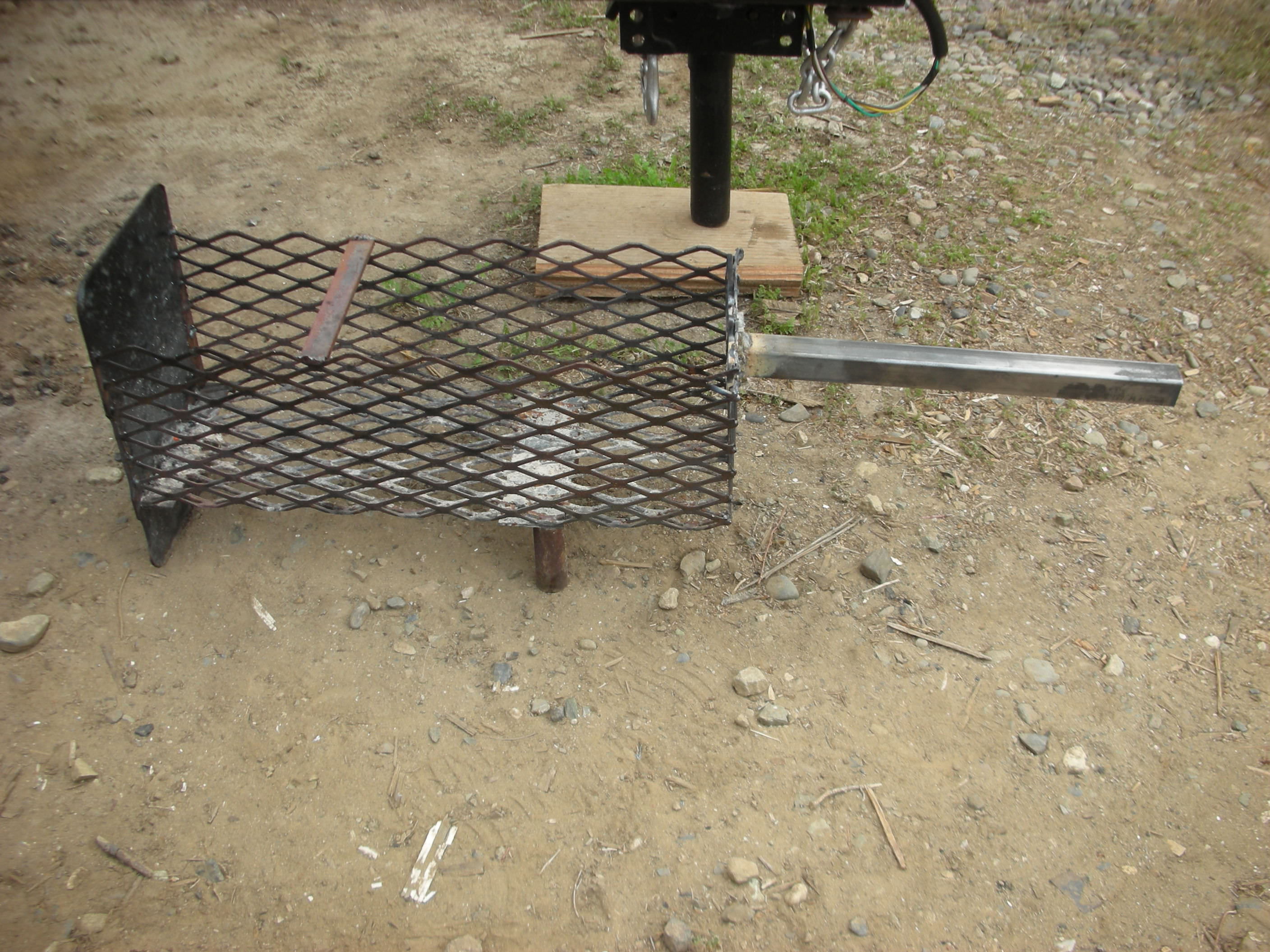 I am smoking a brisket today in the rear half and thought I would update the pictures and progress of this build. The smoker is doing well with it's now split chambers. The BBQ is doing great once I cut out the old BP and dropped the fire grate near the bottom of the tank to get the coals further away from the cooking grates. Tool box is working perfectly, foil holder and paper towel holder work well. I added some shelves to the fender tops and I think I will add a turkey fryer burner in front of the BBQ. I want an easy way to light the chimneys and maybe use it to boil corn later. I have two sets of dual remote probes now too.
Here it is in it's current state..... 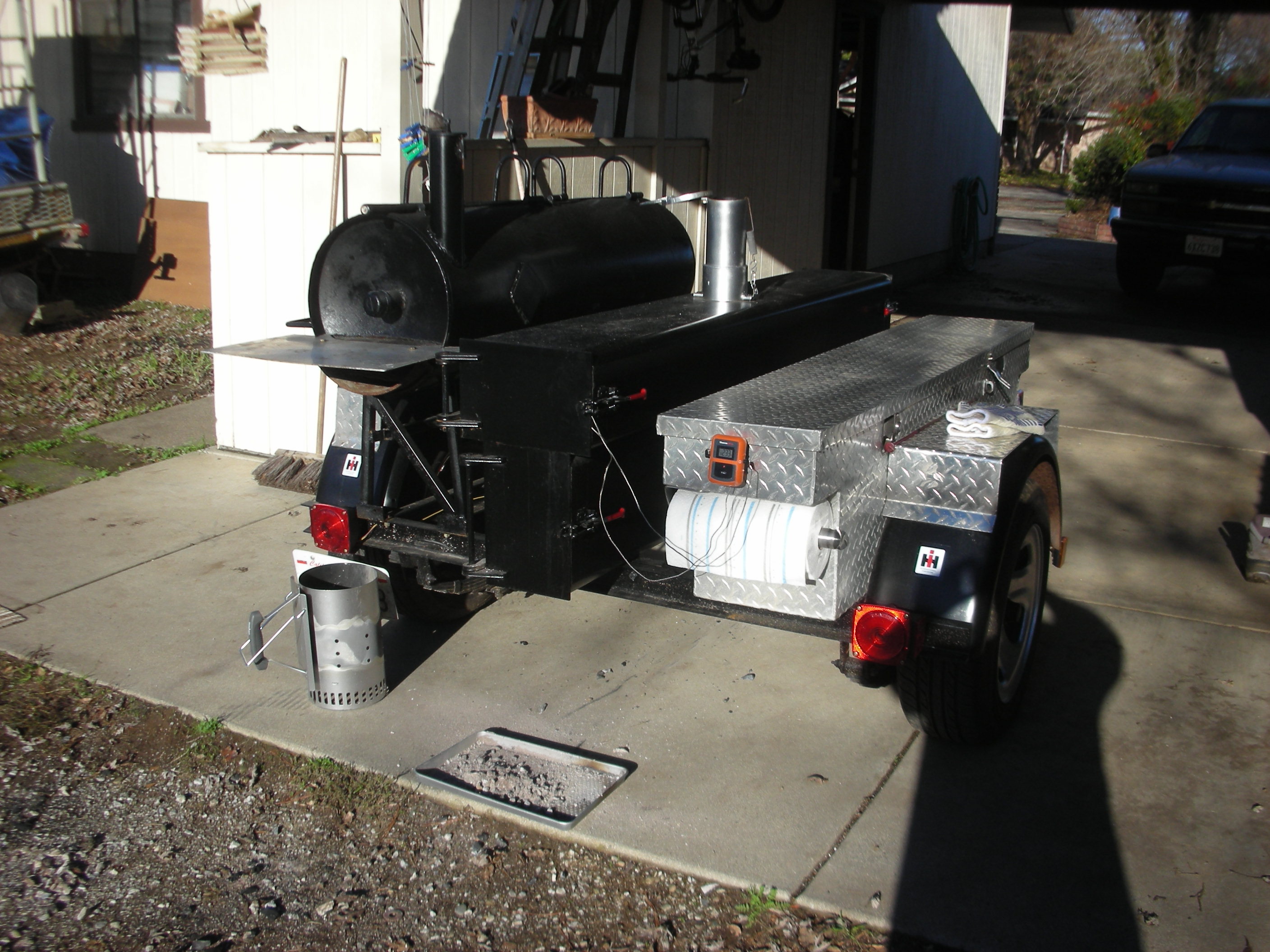 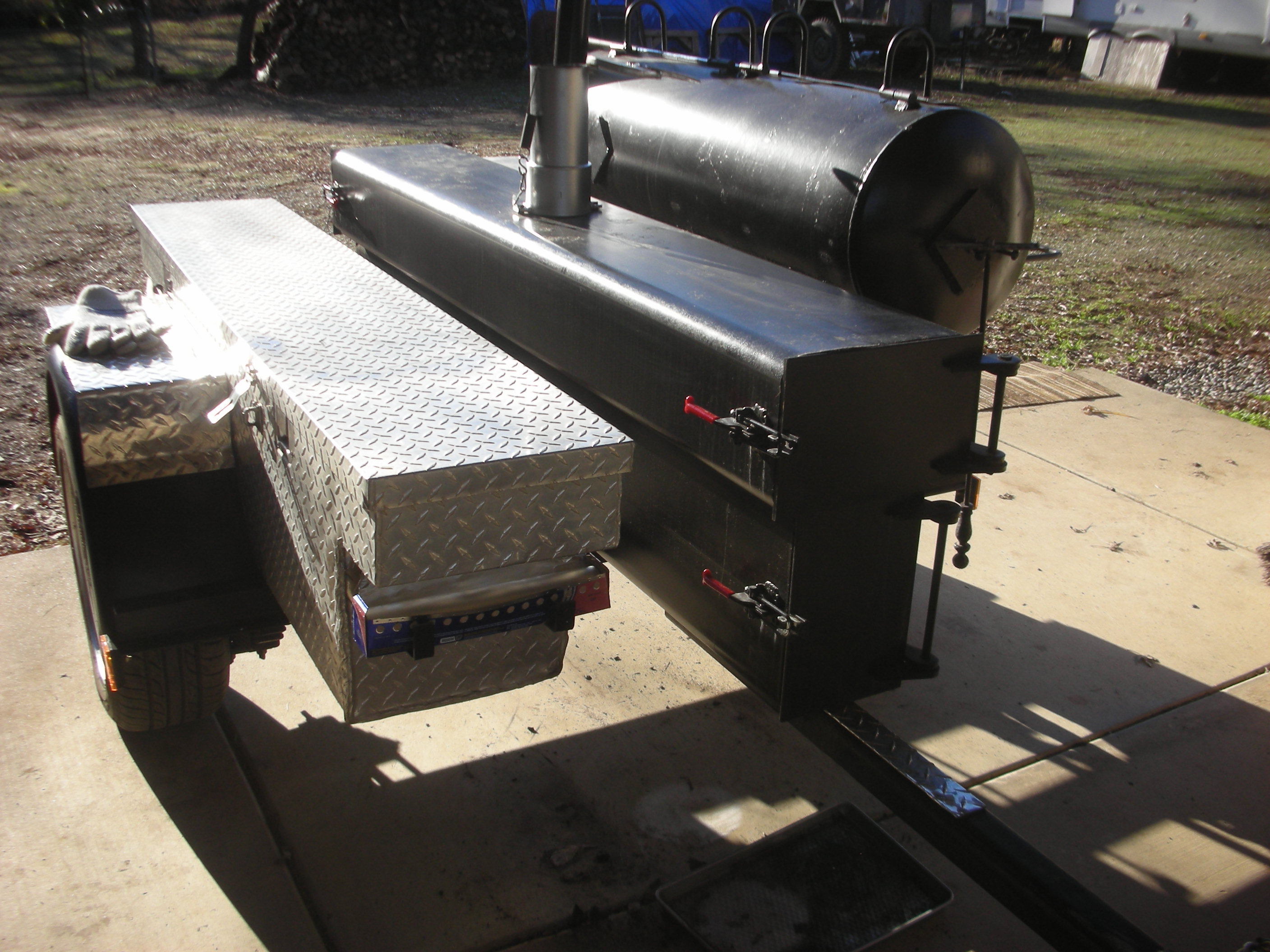 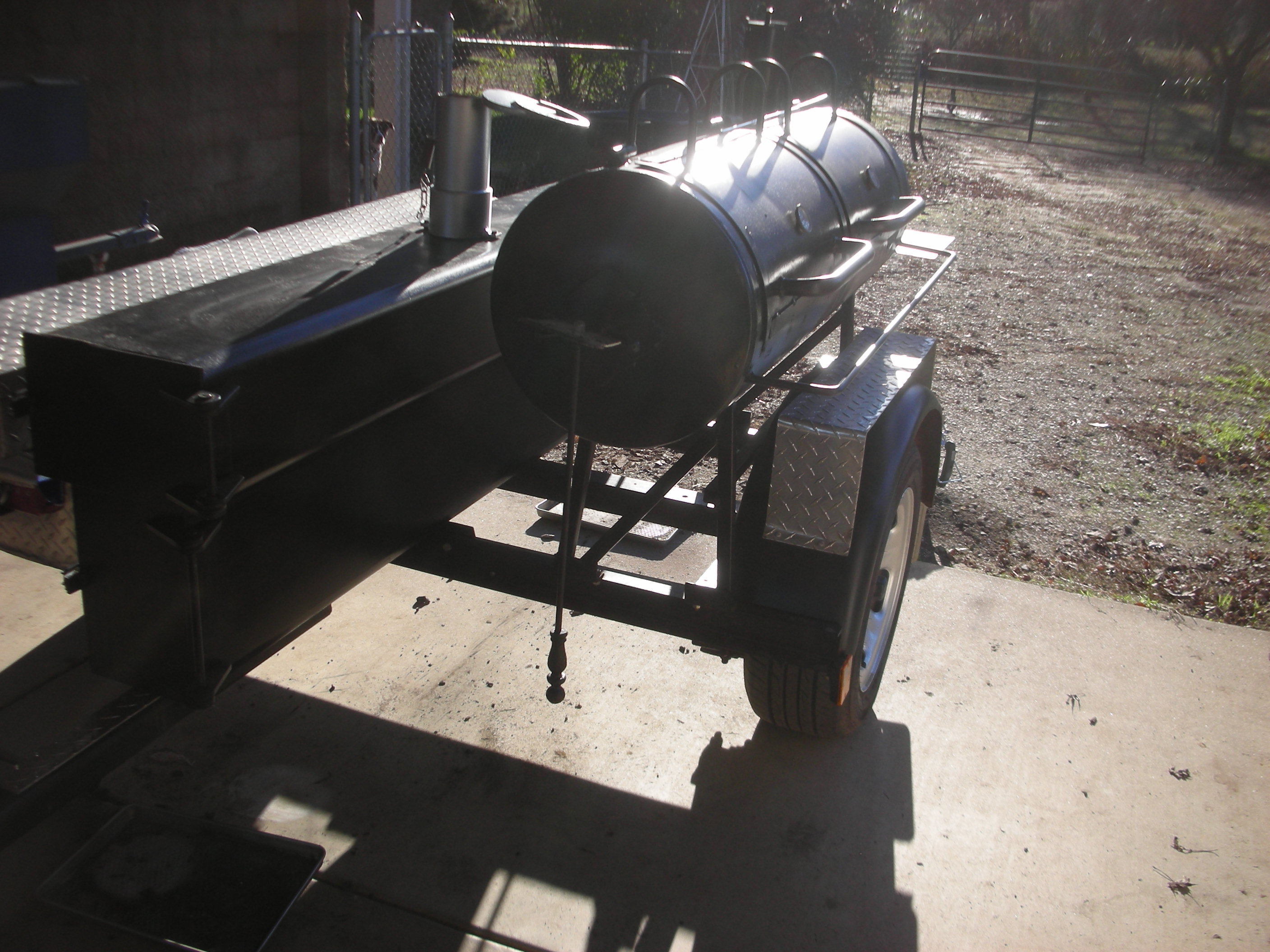 I am finally going to get a chance to run it to the DMV and get it registered this week. Friday it goes to work again for a BBQ. Were BBQ'ing salmon on the grill and I will be smoking some stuffed mushrooms in the tube. I am still looking for that gas burner to mount in front of the BBQ.

I took the trailer rig to work yesterday and we gave it a workout. The menu was three tri-tip roasts, one seasoned with salt and pepper, one marinaded in a Jack Daniels store bought bag mix, and one seasoned with garlic. Next we had stuffed mushrooms and a wild rice salad. There was a 15 pound Alaskan salmon, Mexican corn on the cob, and one lone hamburger.

I tended the smoker and bbq and kept it all going while the other guys prepped the meat and made all the dishes. Everything came out perfectly. The food was top notch and we ate like pigs until it was all gone. There was a big plate of brownies and vanilla ice cream for dessert that put the final nail in our coffins for the night. After dinner our boss looked at all of us and said " I guess nothing will get done the rest of the night" as we were all stuffed to the gills. There were ten of us that ate.

I have to clean up my smoker and bbq today and reset it all for the next time I cook. One thing I am going to change is the fuel I'm using. I have been using lump in the smoker and last night I had an uneven burn with it. The size of the chunks threw it off and the heat was not there once the small pieces burned down. The larger pieces did not perform. I'm going back to briquettes only. I am also still going to add that propane burner in front of the bbq and I am going to put a small water tank on it so I have a little water to clean my hands with on the trailer.
No food pics as we were too busy eating but here it is as I was lighting the bbq. 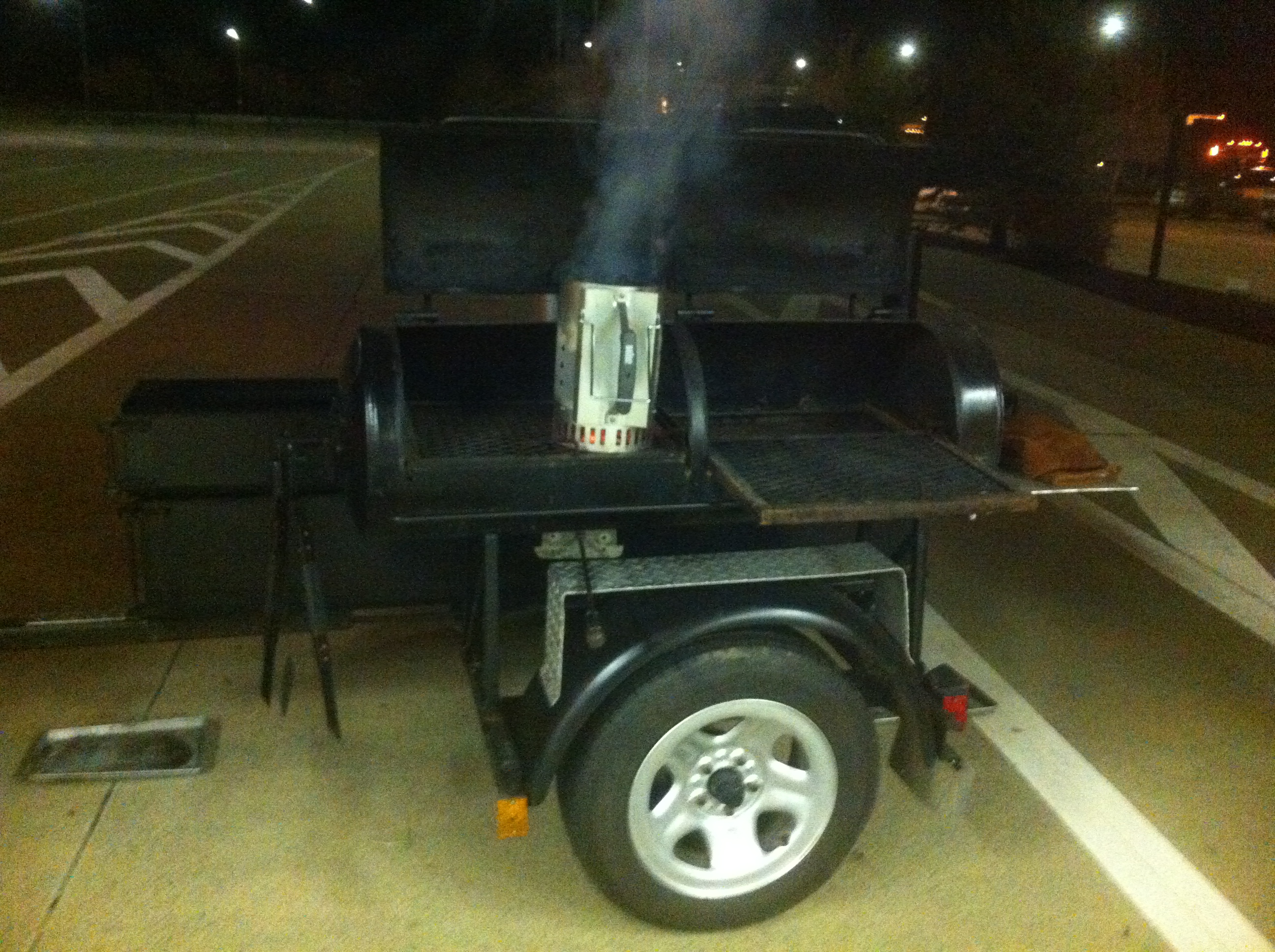 Gernerally no pics of Q... never happened. But you described everthing in so much detail I'm going to call it happened.

ajfoxy wrote: ↑
January 26th, 2019, 10:08 pm
Gernerally no pics of Q... never happened. But you described everthing in so much detail I'm going to call it happened.

I know the rules but it was ass's and elbows to get in line for food with the ten of us.

I’m thinking you have too much fun at work...

I'm thinking you are correct.........the day shift crew lost their cook and here lately when I come to work there is a bunch of empty pizza box's on the tables from a cheap pizza joint. Nobody cooks and they are cheap so they eat cheap food. They do it almost every week where we only make a big meal once or twice a month but we make it count. The food we made the other night was on par with a $50 a plate meal at a restaurant. It is fun to hear the whining from the day crew the next day after my bbq rolls in and they hear how good the food was.

Well, I went and did it.....I added my Coleman stove to the front and a soapy water tank to the rear. The stove will be getting a propane conversion and I will run the little bottles on it. I want to use it to light chimneys and possibly cook on it. The old gas tank in the rear looks scary next to the smoker but it is all cleaned out and has not had gas in it for years. I will fill it with soapy water and use it to clean my hands during cooking. I don't think I can cram anymore onto this little guy 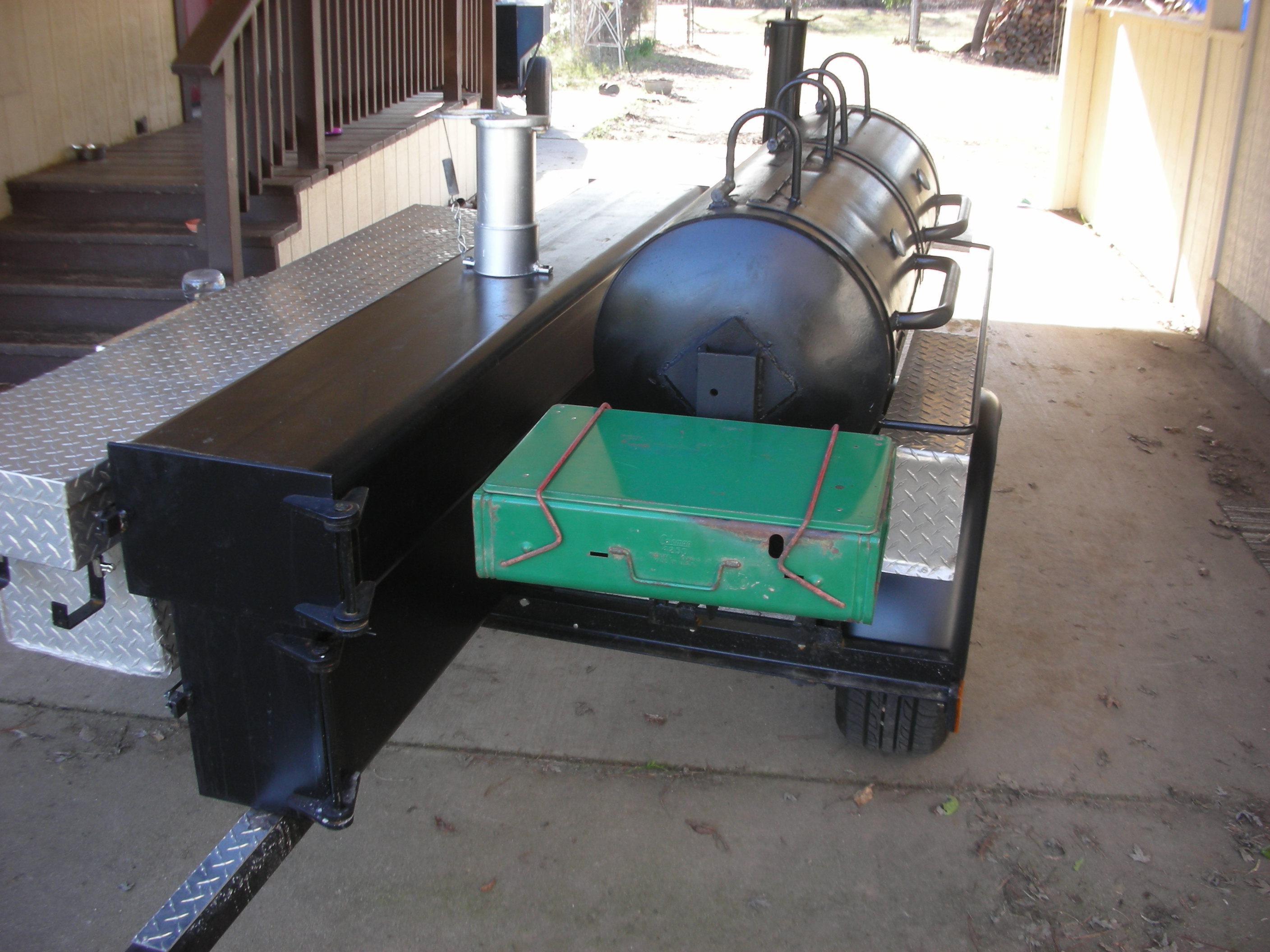 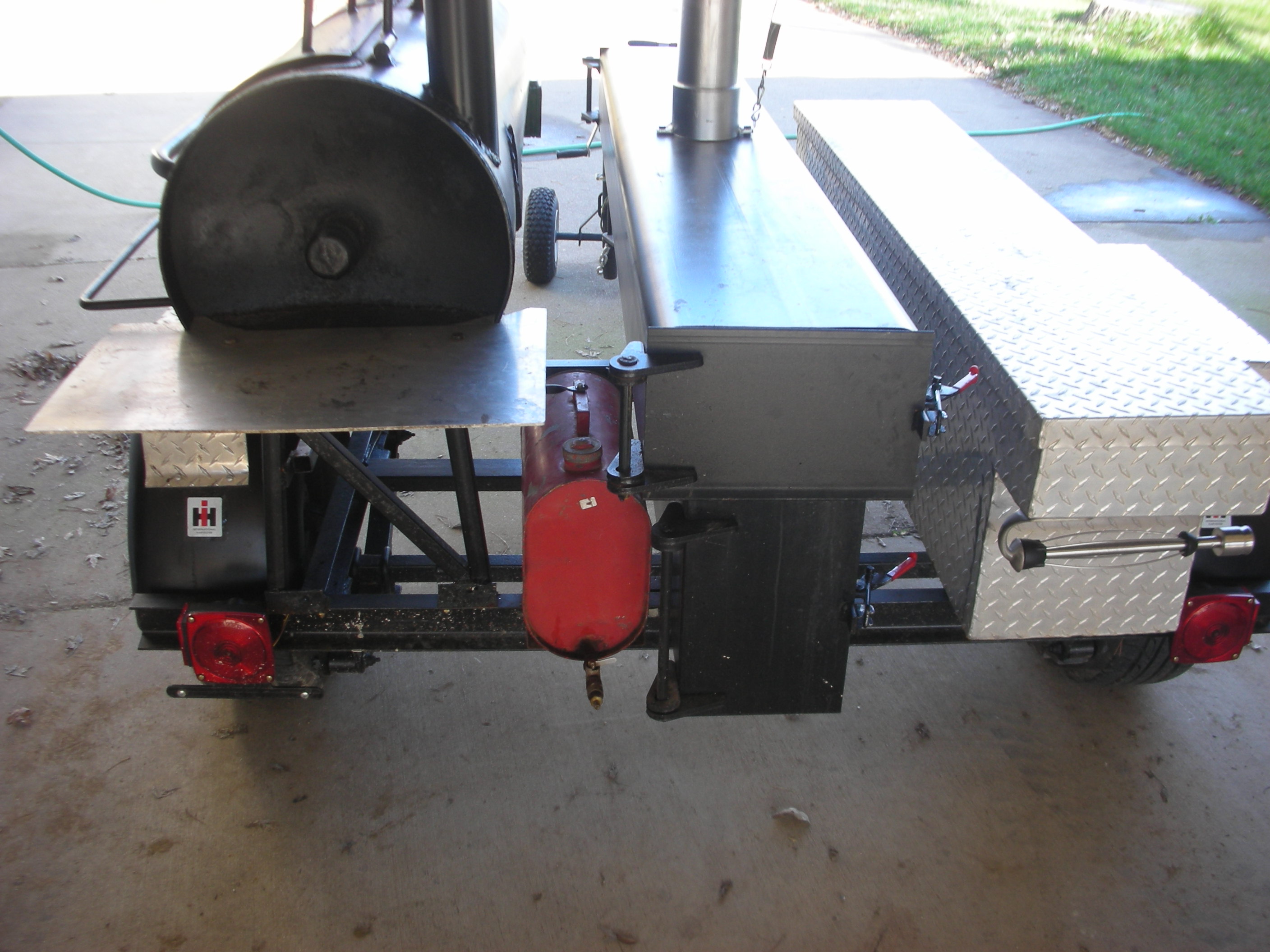 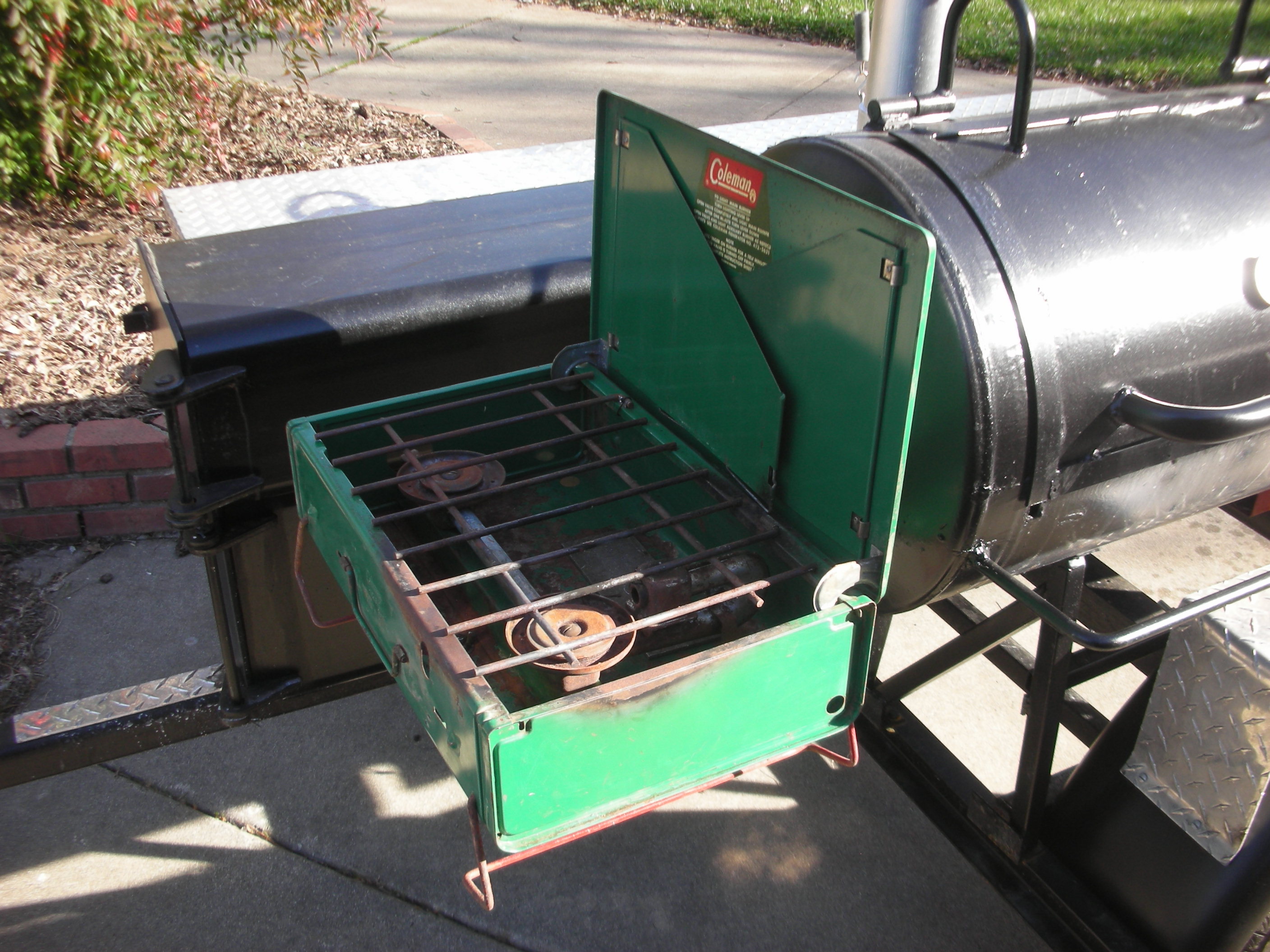 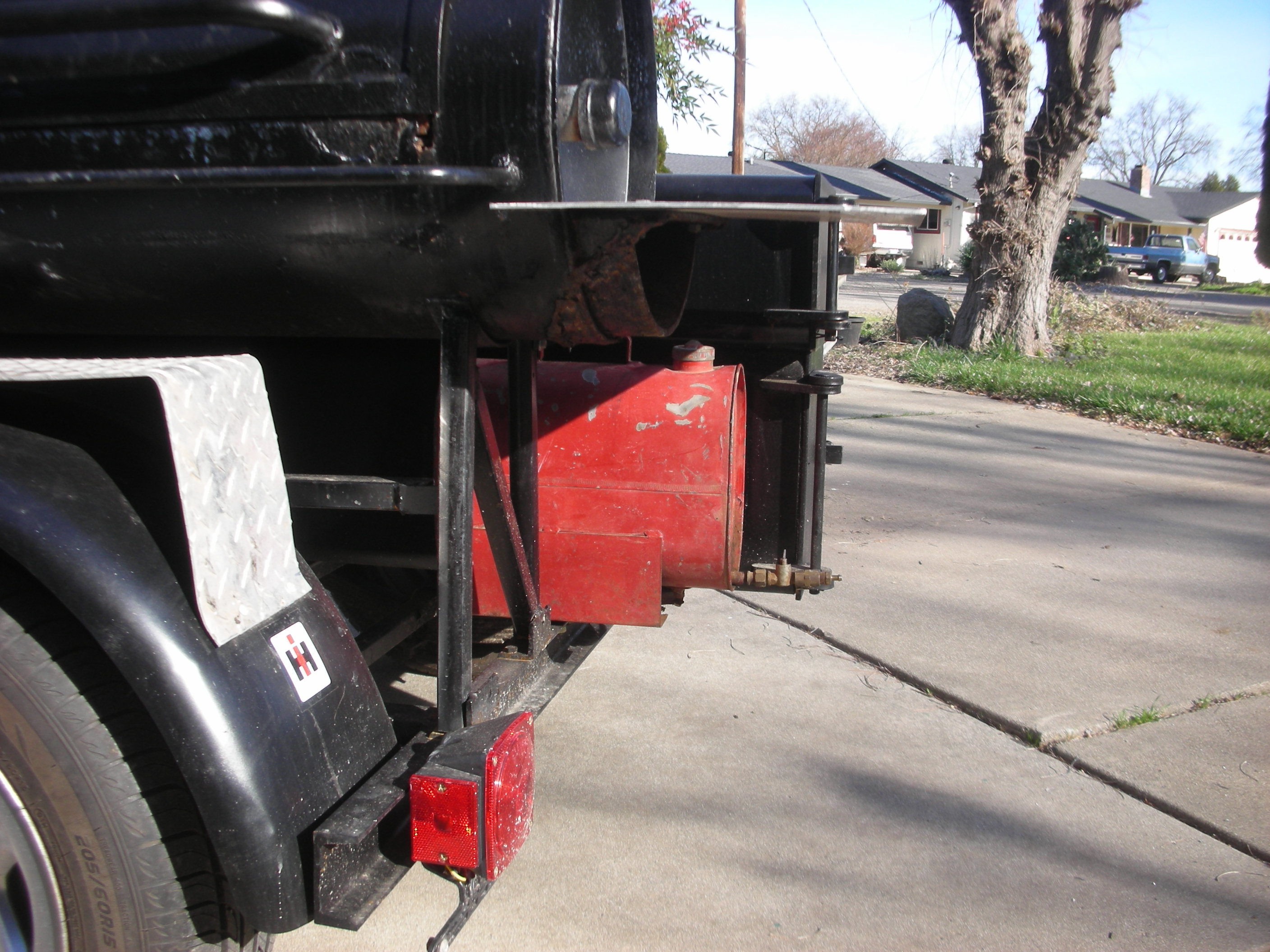 I think it's finally done.....until I make a better bbq for it...I have what I want in mind and maybe I will built it this year if things go well.

It's nice to have a way to wash your hands without leaving the cooker.

Yes it is......I needed it on the last cook and that gave me the idea.

If it is nestled close enough to the pit it might even give you warm to hot water.

This project has come a long way. Looks great

Thanks.....it has been fun learning how to make it work. It has put out some good eats so far.

I finally made it to DMV and got the rig registered. The gal that assigned the vin number was scratching her head as to what kind of trailer it was. I showed her the 3' long by 4' wide frame over the axle and told her that was it....all the rest was load, even the tongue. So it is now registered as a utility trailer that I can remake into anything I want later as the small frame is all that needs to stay the same.

I want to make a different bbq later on. I drew up plans to make a larger bbq, something 4' long and 2' wide to give me more grilling surface. All the rest of the trailer would stay the same. Even though the bbq that is on there works well I would like a little more room. I'm going to start saving for the material and get it built then I can just unbolt the one that is on there and swap them over. It may take a year or two to get it done but it will get done. I am going to make a modified version of one of these to fit on my trailer .....https://www.yodersmokers.com/charcoal24x48.html

I thought I had better update this thread with the current bbq that I built for the trailer..... 2'x4' grilling surface. Adjustable fire tray. Built the bbq doing a loose copy of the Yoder smoker grill as a reference. 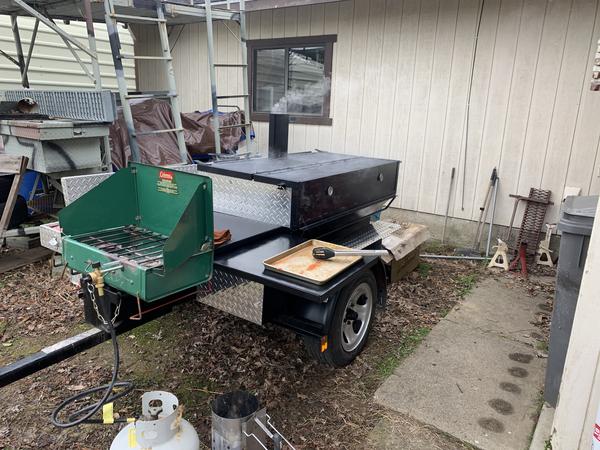 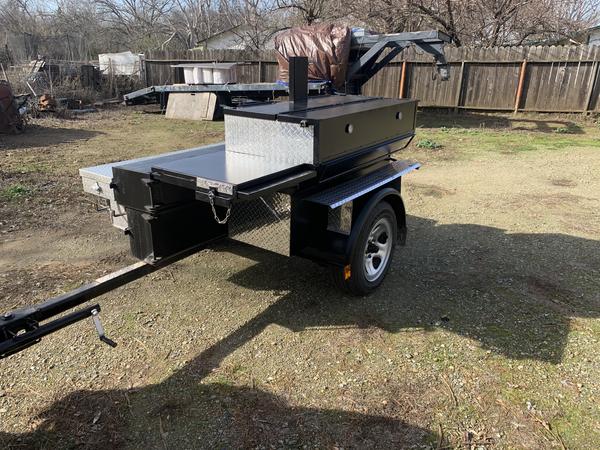 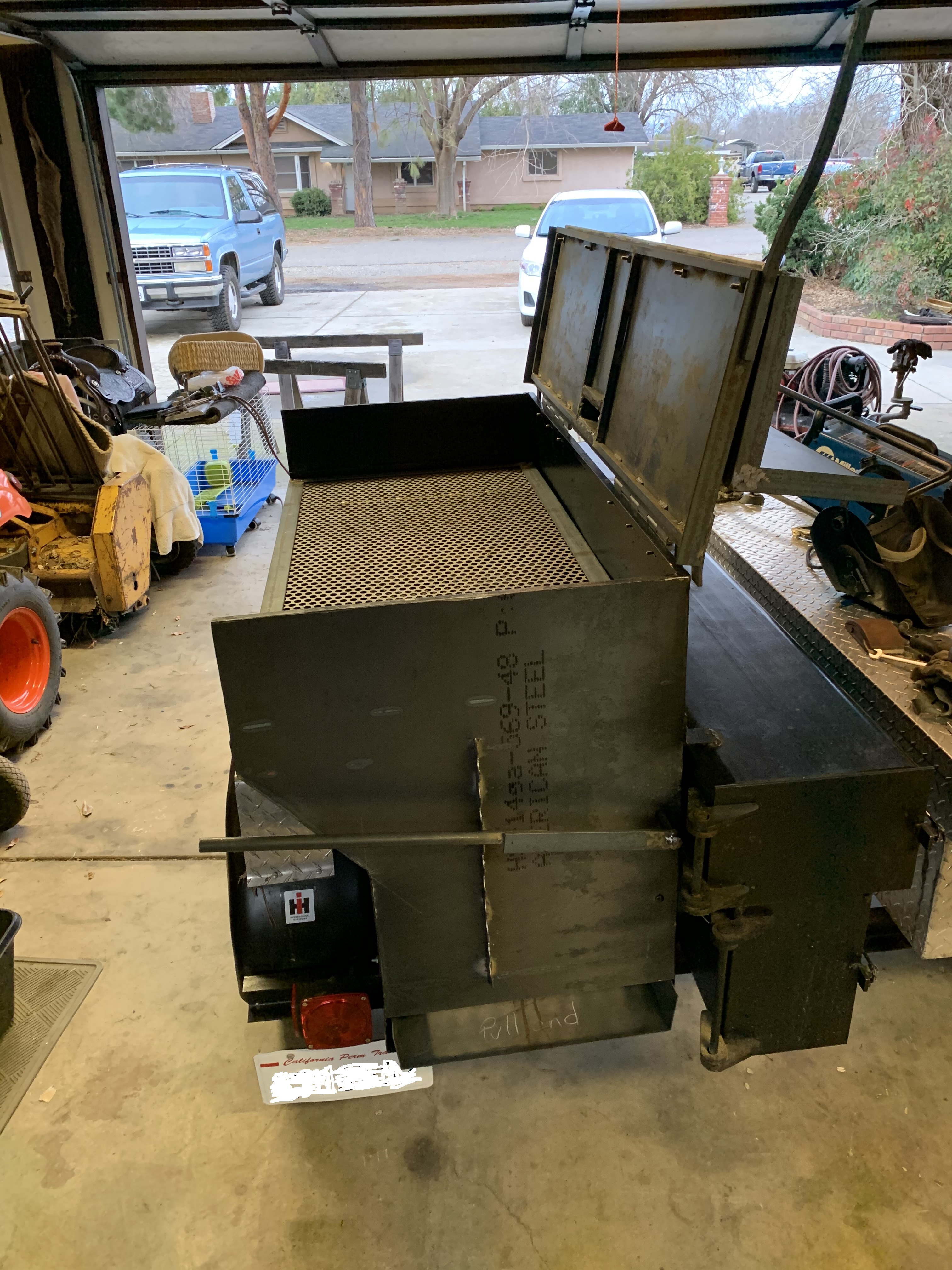